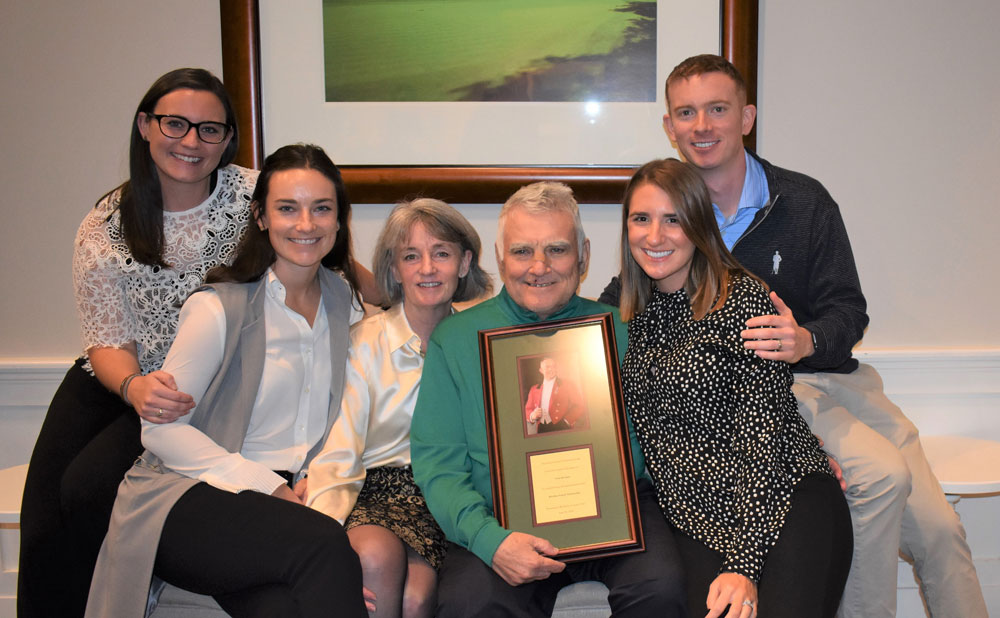 It is with deep sadness that we report the passing of Thomas P. Riordan on November 9th.

Tom was a very dedicated Ouimet Alumnus, long-time Board Member and the recipient of the Ouimet’s 2019 Richard F. Connolly, Jr. Distinguished Service Award.

“Tom was a member of the Board from 2001 until this fall and was involved in so many important initiatives for the Ouimet Fund over the years. He had been a key member of the Banquet Committee, was an annual sponsor, was a contact for other sponsors and procured many silent auction items. He recruited strong board members, volunteers, Scholar applicants and annual donors to the Ouimet Fund. Tom was very involved in the endowed scholarship program, including the William Maich and Peter Dalton Scholarships. He used his connections to secure many pro bono and greatly discounted items for us. Tom’s deep personal history with The Fund and his broad understanding of our programs made him a tremendous asset across the entire organization. He was tremendously respected, a dear friend to so many and will be greatly missed,” said Ouimet Executive Director Colin McGuire.

Earlier this spring, approximately 200 friends came to the Annual Banquet to see Tom presented with the Connolly award, and the table and sponsor sales were an impetus toward the creation of the Riordan Family Endowed Scholarship. This summer, his family, friends and business colleagues subsequently made substantial donations to this permanent scholarship.

Tom was a Milton native who started in golf as a caddie at the Old Wollaston Golf Club and became an outstanding golfer with a very fine competitive record. He went on to Boston College, with help from a Ouimet Scholarship, and was golf team captain. Two of his brothers were also Ouimet Scholars. Tom became caddiemaster at New Seabury and then the club professional. During that time he worked in golf clinics with top teachers including Bob Toski, Peter Kostis and Davis Love, Jr. A club member hired him to the Izod/LaCoste sales staff and he eventually managed a large region based in New Orleans. After returning to Boston, he formed his own manufacturers rep firm specializing in clothing in addition to other products. His golf lines included Arnold Palmer, Payne Stewart, Raymond Floyd, Steve Stricker and David Leadbetter.

He is survived by his wife Germaine, son Sean (also a Ouimet Alumnus and board member) and daughter-in-law Jackie, and daughters Gillian and Monica.

In lieu of flowers, donations may be made to the Francis Ouimet Scholarship Fund, Riordan Family Endowed Scholarship at 300 Arnold Palmer Blvd., Norton, MA 02766 or via www.ouimet.org