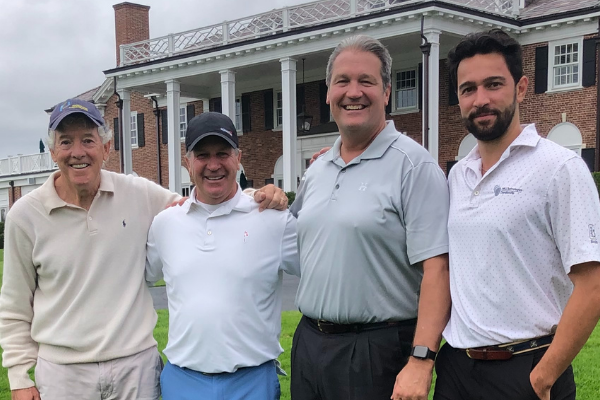 In the spring of 2019, Jesse Borgese graduated from his beloved Providence College with a degree in Finance but an uncertainty about what he wanted to do with his life. He had spoken with his family, close friends and colleagues, but it turned out the conversation that most stuck with him was with a fellow Ouimet Scholar, John Kelley ‘19, with whom he had completed the Dale Carnegie program. John told him, “After all my applications and job searching, it was my favorite loop who ended up helping me find my job. Stick with it, I’m sure the same will be true for you.”  To this day, Jesse still laughs about how prescient that advice was.

If you spent any time at Woods Hole Golf Club in the last decade, it is likely you encountered Jesse Borgese. He began caddying at the club in 2009, and over the years worked his way up to being an “A” caddie. He was such a staple at the Club that he eventually took on the role of Caddiemaster, where he trained and supervised A and B caddies and ran the caddie training program to develop the caddies’ leadership skills, social skills, work ethic and integrity. Jesse embodied what a good caddie should be, and thus developed close relationships with members and even had a few regular “loops” he tended to on a weekly basis.

One of those loops was Robert “Ro” Fallon, a Ouimet Alumnus who had worked at Hyannisport Club and graduated from Ohio University. Ro has always actively encouraged young employees at Woods Hole to be sure to apply for a Ouimet Scholarship. “Ro was one of the first members I caddied for at Woods Hole,” Jesse commented, “and even though I was just learning, we had an immediate connection as he showed genuine interest in my life, goals and growth.” Ro actively pushed Jesse to set his goals high, and when it came time to apply for college, Ro made sure that Jesse was applying for the Scholarship and even wrote his recommendation letter. “Ro always commented on how the Ouimet Scholarship was crucial in getting him where he is, and wanted me to have the same experience,” Jesse stated.

Jesse spent the next four years as a Ouimet Scholar at Providence College and stayed in touch with Ro throughout the years with phone calls, emails, and Christmas cards. In the summers, Jesse was always present at Woods Hole to help his favorite loop. Ro was proud to hear about Jesse’s success in school and eventual graduation and was curious about where Jesse would work when the time came. Jesse informed Ro that he would be taking a two-month trip to Asia, and was nervous that Ro wouldn’t approve and would want him to enter the working world immediately. “I had always wanted to travel to Asia, and I decided to take that trip after graduation,” commented Jesse, “and while others saw it as putting off finding a job, Ro was incredibly enthusiastic and supportive. Ro had spent much of his career in Asia, and was so excited to hear I was immersing myself in another culture.”

As Ro was recommending cities, restaurants and golf courses Jesse needed to visit on his trip, he also mentioned to Jesse that his company Phosplatin Therapeutics, a clinical stage drug development company focused on oncology therapeutics, needed some help in their finance department. Ro met Jesse for coffee to describe the company in detail to him, and showed him that the work they were doing was fulfilling and worthwhile. He welcomed Jesse to apply for a position, and in October of 2019 Jesse impressed the entire team in his interview. Just a few weeks later, Jesse boarded a plane to Japan knowing he had a full-time job waiting for him when he returned.

Jesse has now been working at Phosplatin Therapeutics since January 2020 as a Finance and Administration Analyst, and he is proud of the work he does every day. “The whole company, from the research team to the finance department, knows that the work we are doing can one day help save lives and make the treatment of cancer more tolerable for so many,” Jesse says. “We are currently in Phase II clinical trials and look forward to a day in the not-so-distant future where we receive FDA approval.”

Ro and Jesse now get to work together daily and have become close colleagues and friends. Years ago, when Jesse would caddie for Ro, Ro would allow him to hit a few shots or play a hole or two. They now play golf together regularly, and often meet clients and investors to play and describe the important work Phosplatin is involved in. Jesse even joined Ro as his guest at last summer’s Two-Day Member Guest at Woods Hole. “When we were playing this past summer at Woods Hole, it really occurred to me how full circle our relationship had come,” Jesse noted, “and I know that our mutual Ouimet Fund connection, and our love of golf, is the bedrock of that friendship.”