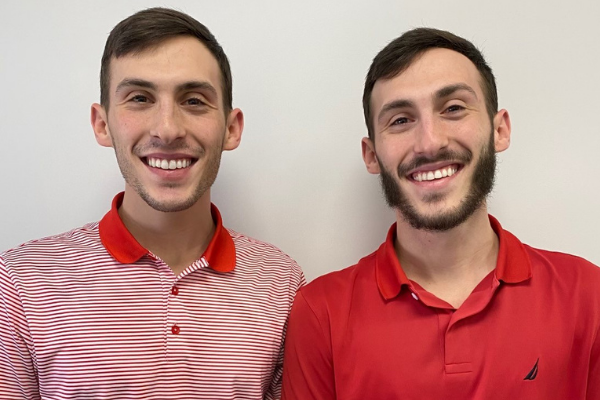 Twin brothers Jeff and John Ciampa have always been close, and when the time came in high school to get their first jobs, they knew they wanted to be able to work together. Having always been fans of golf, they went to nearby Dedham Country & Polo Club to apply for the caddie training program. “I would say we are not only brothers, but best friends,” John mentioned, with Jeff agreeing, “and getting to work together during those summers growing up was a dream.” Over the course of the next six summers Jeff and John became staples in the caddie yard. Along the way, they earned that working at the course was not only a great way to make some extra cash and save for college, but it also qualified them to apply for the Ouimet Scholarship. Always wanting to be close, they headed together to Providence College campus in the fall of 2016, both proud to call themselves Ouimet Scholars.

During their years at Providence College, John and Jeff became model Ouimet Scholars by not only earning impressive grades and getting involved on campus, but also through attending nearly every Ouimet Fund event available to them. True to form, when they learned about the new Ouimet Career Fair launching in the fall of 2019 the two Accounting & Finance majors actively researched each company. One company in particular, Waldron H. Rand & Co., jumped out to them as they noticed several Dedham Country & Polo Club members were on the leadership team. “We knew the Dlugasch family from the Club,” John mentioned, “and immediately thought the combination of having caddied there, and being able to call ourselves Ouimet Scholars, would help us stand out.”

John and Jeff arrived at the Ouimet Career Fair and made a beeline for the Waldron Rand table, and for nearly twenty minutes chatted with the recruiters, making the logical networking connections and expressing interest in the company. “A few days after the Career Fair, we learned that our resumes had made it to the partners’ desks and we received a call offering internships to each of us,” Jeff said. “I can’t stress enough that without the Career Fair, we aren’t sure where we’d be today.” The twin brothers began commuting from Providence College to the Waldron Rand office in January of 2020, but just a few weeks into their internship they learned that their positions were being postponed due to the COVID-19 pandemic. “We were just getting our feet under us, so it was a huge disappointment when the positions were postponed,” the brothers stated, “but the leadership team there couldn’t have been nicer and more accommodating, and they made sure to let us know our internship positions would be there for us when it was appropriate and safe to return.”

Just a few weeks after their graduation from Providence College in the spring of 2020, details were worked out to allow both John and Jeff to return to their internships. They soon learned that their Ouimet connections at the company ran deeper as they would be working with Tom Barrick, a partner at Waldron Rand who himself was a Ouimet Scholar who had worked at Brae Burn Country Club growing up. “Tom has been a great role model for us at Waldron, as he was a Ouimet Scholar when he as in college and has achieved so much,” the Ciampas mentioned, “and it’s been great to learn from him as he seems to appreciate that we have come from similar backgrounds.”

This past September, almost exactly a year to the day since they walked into the Ouimet Career Fair, Jeff and John each received full-time offers to work at Waldron Rand. “Without Ouimet and the Career Fair, and given the events of the last year, we could still be unemployed and searching for a job to this day,” the two said, the gratitude in their voice quite evident. “All the benefits of being a Ouimet Scholar, from the amazing scholarship to the events and general community feel, have been spectacular. But the Ouimet Career Fair created a career path and a future for us, and for that we are beyond thankful.”

TESTIMONIAL FROM A HIRING MANAGER

“This past winter, my colleagues and I recognized a need for a reliable intern. Our hiring need reminded me of a conversation I had with Fund President Jim Moriarty, who had mentioned to me that The Fund was creating a funnel to help firms identify and hire Ouimet Scholars. I knew from playing golf in Massachusetts and supporting The Fund that Ouimet Scholars were ready-made quality candidates, and that to earn the scholarship you go through a rigorous application process. In early January, I reached out to Ouimet staff and worked with them on the best way to market the position, and within two weeks I had a half-dozen quality applications on my desk. From start to finish the process took less than three weeks, and the candidates were so good we had a hard time choosing just one. We look forward to having a Ouimet Scholar join our team as an intern this spring, and will be using this program to hire again in the future.”