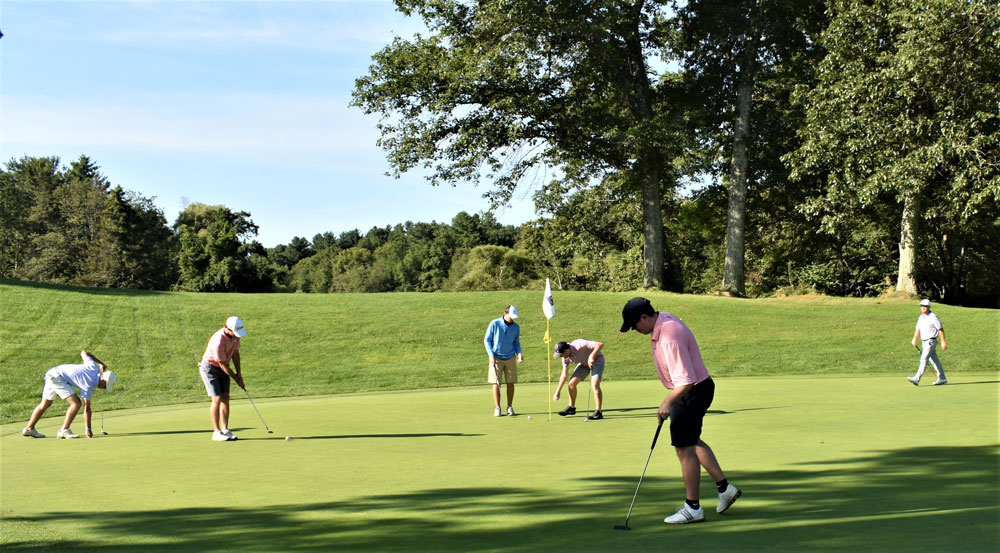 On August 5th, the Ouimet Fund hosted the 27th Golf Marathon, one of the most critical events on the Ouimet Fund schedule, at Juniper Hill Golf Course. Our Marathoners kicked off their morning bright and early as they rallied together to play 100 (or more!) holes in one day in support of Ouimet Scholarships. More than 40 participants and teams gathered for a perfect day for golf with sunny skies and a high of 82 degrees.

Over 5,100 holes were played, and everyone involved had the goal of raising as much money for Ouimet scholarships as possible. Our marathoners did an incredible job fundraising, having spent the last couple months sharing their marathon stories at their clubs or within their social and business networks. We are thrilled to report that the total fundraising surpassed $330,000, and is continuing to grow as donors across the state are supporting the Marathoners! With The Fund’s plan to increase Ouimet Scholarships being awarded to $2.5 million this upcoming school year, the Golf Marathon was absolutely crucial and would not be possible without our marathoners, fundraisers, and supporters.

We would be remiss if we did not mention some of our top participants, which feature longtime members of the Ouimet community. Tedesco Country Club’s longtime Ouimet Chair (and Ouimet Alumnus) Michael Zmetrovich, ’90 and his son, Oliver, were again the top team again this year, and we thank them for many years of commitment to the Golf Marathon. Another dedicated Marathon team, The Country Club, placed second in fundraising, thank you to TCC fundraiser Patrick Fischoeder and Marathoner Jake Ducharme for making that happen! Marathoner Jack Hurley and fundraiser Bob Travers from The Ridge Club placed third, which is just another great showing for a club and Marathoner who help this event year after year.

Watching our golfers play 100 or more holes in just one day is incredible. Our teams meet new people, playing stress-free golf, and have fun while eating, drinking, and winning prizes!

If you were not able to make it out to the marathon this year, stayed tuned for next year to join in on the fun!