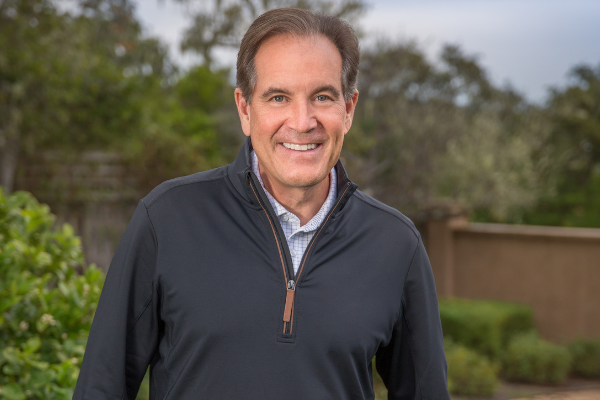 Three-time Emmy Award winner and five-time National Sportscaster of the Year Jim Nantz will receive the 2021 Francis Ouimet Award for Lifetime Contributions to Golf! We are thrilled to welcome Mr. Nantz as our 2021 Honoree, recognizing his immense contributions to golf throughout his nearly forty-year career.  The wait to welcome our friends back to the Banquet and honor another of the game’s greats is over, and we look forward to a wonderful event at the Encore on October 14! Thank you to the sponsors who have already committed to this important event, as the Banquet is crucial to The Fund awarding a new record $2.75 million in need-based scholarships this fall.

Since joining the CBS Television Network in 1985, Mr. Nantz has served as the lead anchor of CBS’s golf coverage, including the PGA Tour, Masters, and the PGA Championship. He also currently serves as the lead play-by-play announcer for THE NFL ON CBS, including the Super Bowl and the lead play-by-play announcer for college basketball, including the NCAA Men’s Final Four. In 2007, Mr. Nantz became the first commentator in history to complete the rare broadcasting trifecta – calling the Super Bowl, NCAA Men’s Final Four and the Masters all in a span of 63 days. Mr. Nantz once again repeated this trifecta in 2010, 2013 and 2016.  In 2019 and 2021, Mr. Nantz completed an even rarer quintet, calling the AFC Championship, Super Bowl, Final Four, Masters and PGA Championship in a span of 120 days.

Mr. Nantz will be inducted into the National Sports Media Association Hall of Fame in December 2021. He was honored in 2019 with the Arnie Award, presented to golfers who give back to the game and reflect the values and generosity of Arnold Palmer, who was the first Ouimet Award Honoree at the Annual Banquet in 1997. In December 2018, Mr. Nantz was inducted into the Sports Broadcasting Hall of Fame and in August 2018, Mr. Nantz received the 2018 Ambassador of Golf Award presented by the PGA Tour.