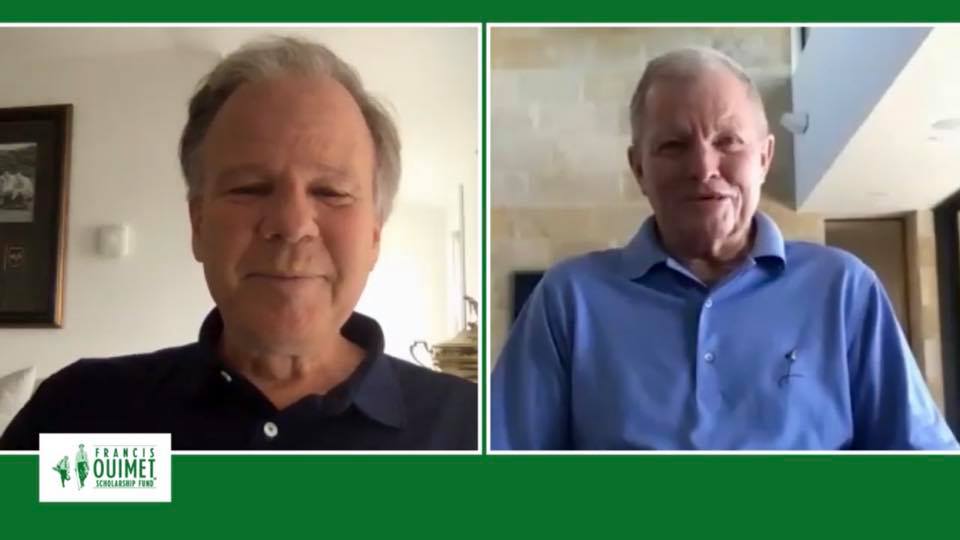 On May 21st, thanks in large part to the enthusiastic participation of Tom Kite and Dave Marr, III the virtual Annual Banquet Honoring Tom Kite was launched on Ouimet.org and presented the first opportunity for the entire Ouimet community to “attend” the Annual Banquet. The Banquet is perhaps the most important event on the Ouimet calendar. The funds raised are vital to providing scholarships annually, so a huge thank you to our generous and loyal sponsors who stuck by the event despite the financial difficulties presented by the pandemic. This great event and the Ouimet mission were able to reach a far larger crowd than any Banquet before, so if you have not had the chance to view the online Banquet, it is still available at www.ouimet.org!

“We were so excited to have Hall of Famer Tom Kite as the 2020 Honoree,” said Jim Moriarty, Ouimet Fund President. “Tom has been a force in the game of golf since his junior amateur days, and to be able to honor him with the Ouimet Award – and for him to work so closely with us to make the virtual event a success – I simply cannot say enough great things about Tom Kite. He has made a huge impact on the Ouimet Fund and the game of golf. He is very deserving of this award.”

In the interview with Dave Marr, III, Tom noted how deeply proud he was to add his name to the recipients of the Francis Ouimet Award, golfers he referred to as “heroes of mine.” To coincide with the 2020 Award, an endowed scholarship was created in the name of his late wife, Christy, who passed away in 2015 after a battle with cancer.

“I hope with the creation of the Christy Kite Family Scholarship, we are able to help many deserving young people achieve their dreams, just as my family was so instrumental in helping me achieve mine.”

Student Speaker Jerome Sullivan, an incoming senior at Providence College, spoke publicly for the first time about the struggle of growing up with a single mother raising seven children – and the difficulties that presented in affording college. Sullivan’s speech was widely praised and many were able to resonate with his stories of growing up on a golf course and working in the game for more than a decade. Continuing the recent tradition, Jerome learned that the entirety of his financial need would be covered by the Ouimet Fund for his senior year, making an enormous difference to his entire family.